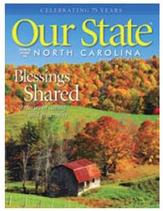 Article titled:  A World Away, Written by Molly Harrison
International borders pose no obstacle to North Carolinians committed to making the world a better place…

While working in Turkey on a Fulbright Scholarship, Dr. Medge Owen, today a professor of obstetric anesthesia at Wake Forest University, saw women suffering childbirth without access to pain-relief options, so she created programs in obstetric anesthesia and neonatal resuscitation.  But Owen did not want her work for mothers and babies to stop there.  Inadequate medical care – due to a lack of provider education and equipment and due to cultural differences – was causing unnecessary fear, pain, and even death for mothers and babies across the globe.

By the time she came home to Winston-Salem, Owen had an idea:  She began to organize trips in which teams of medical professionals traveled to educate local physicians and health-care workers about safe birthing methods.  “I saw that I could go in as a foreigner and make a difference, and things actually did change, and programs were sustained,” Owen says.  “I thought, if I can do this, other people can do it as well because there’s nothing that special about me.  Other people, given the opportunity, could do the same thing.”

In 2001, Owen started a non-profit organization that she named Kybele (pronounced kie-BELL-uh) after the ancient Anatolian goddess of fertility.  While she was still working at Wake Forest University and had a baby of her own, Owen developed the organization over the next three years, with the help of other volunteers.

In 2004, Kybele started sending teaching teams around the world, and since then, professionals from the United States, Canada, Australia and Europe have traveled to Turkey, Brazil, Romania, Egypt, Armenia, Ghana, and Croatia to work alongside doctors in their local environments.  Kybele has sponsored 15 major in-country medical conferences, trained hundreds of doctors and nurses, and enlisted more than 150 medical volunteers, including anesthesiologists, obstetricians, neonatalogists, internists, nurses, and midwives.  Volunteers have donated more than $1 million in educational materials, textbooks, medication, and equipment to host countries.

With only one paid, part-time administrative assistant, the organization is dependent on volunteer efforts.  Kybele is funded through donations, fund-raising, and foundation grants.  “Somehow the money just appears,” says Owen.  “I don’t worry about it so much anymore.  I just know the right things will happen to make us go forward.”

Kybele’s main focus is safe birthing, but it also focuses on providing compassionate care.  For example, one change they’re trying to implement in the countries they visit is to allow fathers in the birthing room.  “It started as an anesthesia-based initiative to increase pain relief, but not it’s a multi-disciplined approach during delivery,” says Owen.  “We tailor country-specific programs because each country has different needs.”

Owen says the Kybele teaching trips benefit many people.  Of course, the programs benefit mothers and babies, as well as the onsite health-care workers, who are eager to learn modern techniques.  But the trips are unexpectedly rewarding for the health-care professionals who volunteer to teach.

“Teaching doctors are empowered to see that they can have a global impact, and it’s very rewarding to see how much their knowledge is appreciated,” says Owen.

Kybele brings benefits to Owen as well.  “I was searching for my life’s calling or passion, and I felt like this was it,” she says.  “I always felt like I wanted to do more than work in a hospital.  I’m satisfied that this is what I’m supposed to be doing with my life.”

Molly Harrison writes from her home in Nags Head, NC.