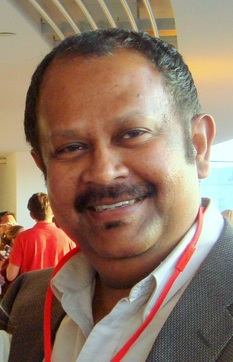 It is with sadness that we announce the passing of Kybele Team Member  Dr. Ratnasabapathy Sashidharan (Sashi)  on January 30, 2010.

We sincerely appreciate Dr. Sashi’s contributions to Kybele’s work and global health.  He will be missed.

Sashi served on the Obstetric Anaesthetists’ Association (OAA) committee for two terms (six years) from 2002 and held the post of Co-Editor of the OAA Newsletter, Pencilpoint. between 2003 and 2008.  For many years he was the OAA’s representative for Kybele and took part in numerous overseas trips on behalf of the OAA, Kybele and other organizations teaching safe obstetric anesthesia.*

Kybele is pleased to announce that Dr. Vicki Clark will be the new Kybele Liason with the OAA.  Dr. Clark has served as a Kybele Team Member on the Brazil and Egypt projects.

*Information and photo courtesy of the OAA.