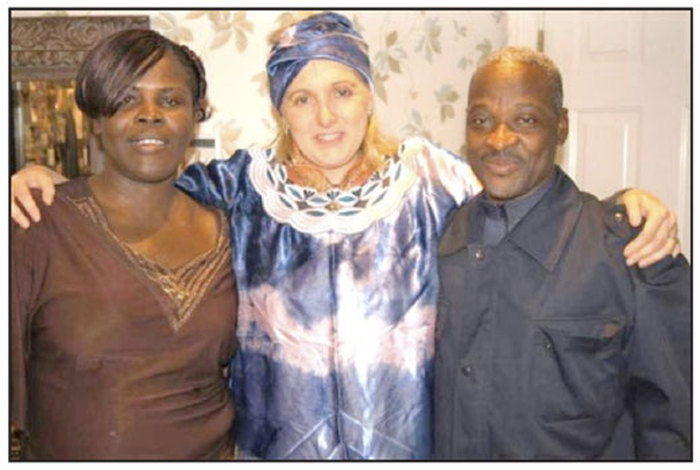 In October, Ghanaian nurse anesthetists Pearl Ansah and Jacob Wumbei visited Wake Forest Baptist Health, Forsyth Medical Center, and Duke University Hospital as part of Kybele’s commitment to ongoing education. Deeply involved in the creation of the new nurse anesthetist program at Ridge Hospital (only the third such school in Ghana), each have followed very interesting paths to get to this point.

Pearl, whose first name is Araba, meaning “a girl who is born on Tuesday”, is a member of the Akan tribe from the southern part of Ghana, was the seventh child in a family of four brothers and four sisters. After completing a basic course in nursing, she then took a course in midwifery, which was required of women who go into anesthesia. Her interest in anesthesia developed as she sees it as more challenging and requiring better teamwork and responsibility.

She’s been involved with Kybele since 2005 and she saw Medge handle some difficult cases. Her gratitude for what Kybele has meant to her work is deep and she is especially grateful for Kybele’s role in setting up the nurse anesthesia school, which just graduated twenty-two nurse anesthetists, three of whom will work at Ridge Hospital.

She encountered a number of surprises while visiting in N.C. Pearl commented on the good teamwork among members of the medical teams she observed and how friendly and polite people were to one another. She was also surprised by the size of the hospitals and how much equipment was available. Upon her return back to Accra, she planned to focus on strengthening teamwork and developing some skills labs, and also to emphasize more collaboration with the anesthesiology programs.

We owe much gratitude to Jacob Wumbei’s uncle because of his influence on Jacob as a young boy. Because he lived with his uncle for a number of years, this gave Jacob the privilege of attending school, although because he was in a rural area, the schools weren’t as good as those in urban areas resulting in more limited options for further education. He studied engineering science with the hope of going into medicine, but medical school was out of reach. Inspired by his uncle who was a nurse, he decided to go into nursing and worked in remote rural areas for several years before going to anesthesia school. He’s now involved as well in leadership of the Ghana Association of Nurse Anesthetists and is dedicated to safe motherhood. As he says, “mothers should not lose their lives to anesthesia”. Some of his key areas of emphasis are professionalism and competency. He hopes to bring closer collaboration between Kybele and the nurse anesthetist association.

In a moving tribute to Kybele and Medge Owen, Jacob and Pearl presented her with a plaque expressing the gratitude of all the nurse anesthetists to Kybele for all that has been done in Ghana. Thank you, Pearl and Jacob.